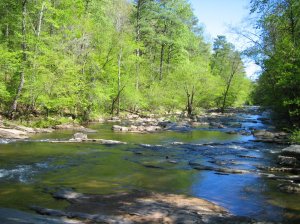 In the last few months, hundreds of people have asked the Board of Commissioners to honor its commitment to save land for parks by issuing the $40 million Park Bond of 2008, before using that park bond’s millage rate for the new Braves Stadium. Here’s how we can do both, and do it without raising taxes.

The current Debt Service Fund is set at .33 mills from property tax revenue. Of the total .33 mills, .11 mills was added in 2011 as a preventative measure against the economic downturn and to protect from low property tax income. Luckily, the economy improved and is on track to improve over the next few years, so a surplus tax revenue has been collected for the Debt Service Fund from 2011 until now.

Coincidentally, in July 2008, the Board of Commissioners planned to add that same amount, .1 mills, to the Debt Service Fund specifically to pay for the 2008 Park Bond.

In other words, .1 mills  (which works out to about $9/year on an average home) is all that is needed to issue the 2008 Park Bond, and fortunately .11 mills was added in 2011 as a buffer against economic downturn. The years of economic upturn since 2011 have created this simple solution to issue both the Park Bond 2008 and the Braves Stadium Bond:

If Park Bond 2008 is not issued before moving Park Bond millage rates from 1996, 2006 and 2008 Park Bonds to the General Fund, it gives the impression that Park Bond 2008 funds are being misallocated by the Braves stadium deal. To avoid that, we are asking that the County honor the 2008 referendum by issuing the $40 million dollars for the purchase of parkland.

Using the full amount of Park Bond 2008 to purchase greenspace / parkland will greatly improve home prices, people’s health and the environment as well as the overall quality of life in Cobb County. These improvements will in turn add to the economic vitality of Cobb County, and that is a win for everyone.

Please support this effort by sending a quick email below to the Board of Commissioners, asking them to use the Park Bond 2008 for parks.

More information on this topic: